How to Unlock and Restore Mobility for Parkinson's Disease | Lifemoves

How to Unlock and Restore Mobility for Parkinson’s Disease 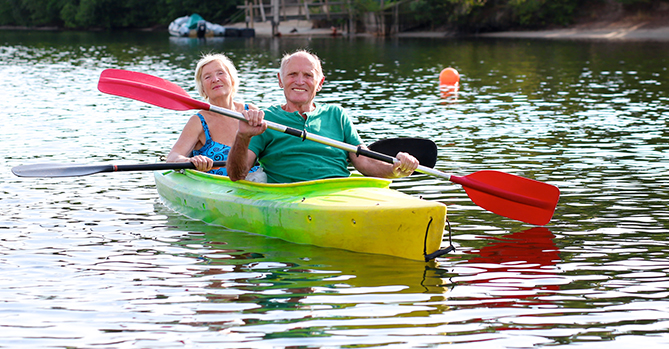 A diagnosis of Parkinson's Disease doesn't mean that you have stop being active. In fact physical activity is a vital component of treatment. There are a variety of exercise and fitness training programs which improve the mobility for patients with Parkinson’s Disease.

What is Parkinson's Disease?

Parkinson’s Disease (PD) is caused by the degeneration of basal ganglia in the brain, which results in various constraints that strongly influence the mobility of the individual: rigidity, bradykinesia, freezing, inflexible program selection, impaired sensory integration and reduced executive function. Levodopa and other anti-Parkinson’s medications do not improve these constraints, so exercise has become an attractive option for maintaining mobility and increasing quality of life.

Movements such as walking backwards, lateral shuffle, grapevine cross and high knees promote a greater range of motion, which is usually reduced during postural transitions and walking. This training also strengthens patients against bradykinesia. Bradykinesia is characterized as the slowness of voluntary movement, and is also described as an individual’s inability or weakened ability to regain balance after a postural perturbation, such as when someone bumps into them and anticipatory postural adjustments, such as when they know they have to reach for something.

As PD patients progress in their programs, cognitive tasks and unstable elements should be introduced to enhance their postural stability and ability to complete dual tasks. A cognitive task may include counting backwards, simple mathematics or the memorization of a sequence. BOSUs are an example of an unstable tool that can be introduced to an exercise routine. Progress from simply being able to stand for 30 seconds, to 1 minute on the dome side doing squats.

Strengthening the ankle, hip, and trunk has been shown to increase the walking speed of patients with PD. Exercises such as a pelvic lifts, squats, hamstring curls, leg extensions and leg lifts may help to prevent the slowness and stiffness of movement. We've even used modified deadlifts to increase hip extension power which boosts walking speed.

Studies prove that the power generated in eccentric contractions (lowering against resistance) is constant with relation to velocity. Aging also has been shown to have a reduced influence on the strength of eccentric actions. The power generated in concentric contractions (the shortening of the muscle against resistance), however, decreases proportionally with regards to velocity. These findings resulted in the recommendation that programs consist of eccentric-based exercises. This may be due to the fact that the longer the muscle is under tension, the greater the neural recruitment for strength gains, and individuals with PD are more likely able to maintain this eccentric contraction for longer periods of time.

Kayaking, boxing and Tai Chi are also believed to improve symptoms of PD. Kayaking develops a greater range of motion in the upper body and trunk while Tai Chi increases the limits of stability and improves the perception of posture and coordination of arms and legs. A recent article on CBC promotes boxing a﻿﻿s a way to battle Parkinson's one punch at a time. Boxing aids in the sequencing of movements and anticipatory postural adjustments.

How to Stay Active if You Have Lyme Disease

Why Our Balance Changes with Age

How Kinesiologists Contribute to Successful Rehabilitation